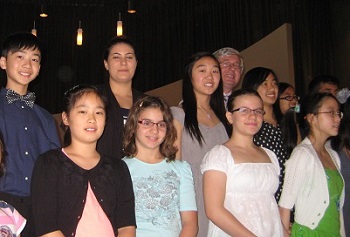 The summer recital of Debut Piano Studio took place on June 29, 2015 at the Donway Covenant United Church in Toronto. The evening was filled with very enjoyable, motivational and inspirational piano performances by the students, wrapping up a very successful school year on a wonderful... musical note.

Breaking News: Our student Johann Derecho just won the ORMTA Young Artist Competition at the provincial level on July 25, 2015 (ORMTA stands for the Ontario Registered Music Teachers Association). The same competition honoured him with the Esther Su Memorial Award for the most promising talent out of all competitors in different categories. The prizes come with a monetary award and a concert tour in the province of Ontario. We are thrilled and looking forward to seeing him perform in concerts, as four venues are already booked and more are to come.

Johann also won the Founder's Award Class and Scholarship to attend the Peter de Grote Festival and Summer Academy in Amsterdam, The Netherlands, after participating in the 2015 North York Music Festival. Congratulations, Johann!

Emily and Julia won first prizes at the North York Music Festival. At the ORMTA Spring Auditions of the Scarborough Branch Emily won the First Prize in the Intermediate level and Maria was promoted to participate in the GTA Zone Instrumental Competition. Great job, girls, we are very proud of you!

The Scholarship and Awards Auditions of the North York / York Region Branch of ORMTA concluded with scholarships and prizes for Emily, Julia, Justin, Chris and Johann - warm congratulations to all!

At the CCC Toronto Piano Competition, Chris won the second place in the ARCT level category with Partita by Bach.

Our piano students in music festivals and competitions of 2013 - 2014

At the 2014 CCC Toronto Piano Competition, Christine received the First Place for her performance of Fantasia in D Minor by Mozart, Johann received First Place in the Age Achievement category after a two-piece performance of Prelude and Fugue by Bach and Basso Ostinato by Shchedrin. He also received the Third Place with Partita in C Minor by Bach. Big congratulations to them!

Johann, our student who is a fierce competitor in music festivals and piano competitions, was also the winner of Symphony on the Bays 2013 Young Artists' Competition, in the Junior category, with Grieg's Piano Concerto in A minor. He was invited to perform in concert with the Symphony on the Bay at the Burlington Performing Arts Centre on November 3, 2013 and brought the audiences to their feet at the end of a fantastic performance!...

He also won the Second Prize and a scholarship in the national finals of the prestigious Canadian Music Competition held this year in Sherbrooke, Quebec. A video of the piano performance of Grieg concerto is among the pieces in the playlist below.

Warm congratulations to all our students who participated at other music festivals and piano competitions in 2013!

Our piano students in music festivals and competitions of 2012

The year of 2012 was one of great accomplishments for most of our piano students, who prepared themselves excellently and participated in many piano competitions and music festivals in Greater Toronto Area, the Ontario province and beyond - such as the country-wide Canadian Music Competition, as highglighted below. Congratulatinos to all for well deserved results following their sustained efforts in piano education!

Our students in music festivals and competitions of 2011

The highest and most honourable awards of the ORMTA Spring Auditions went to Debut Piano Studio's students. Kevin received the Ann Hulbert Award and scholarship for highest mark of all competitors, and represented the ORMTA branch in the zone competition, where he placed third. Jason and Justin received the Oceanna Music Publications Award and Justin was awarded the Christine Loach Award and scholarship. Everybody else was selected for the Honours Recital.

Our students in music festivals and competitions of 2010

The 2010 Kiwanis Musical Festival of Greater Toronto: A large number of our students signed up and we had a total of 22 Gold and 5 Silver and quite remarkable placements: one Best in Class, six First Places, six Second Places, five Third Places.

The 2010 ORMTA Spring Auditions took place in April. All Debut Piano Students who participated qualified for the Honours Recital and Chester won the Ann Hulbert Award with the highest mark of 92. He performed next in the GTA Zone Competitions as representative of the Scarborough Branch, where he placed second.

The Mandarin Lions Music Festival: All our four participants received in total five 1st, three 2nd, and one 3rd placements.

Our students in music festivals of 2009

To book a private piano concert with Sergei Pavlov, please contact us . Bookings are required in advance. See highlights of Sergei Pavlov's piano repertoire on the Teacher page.