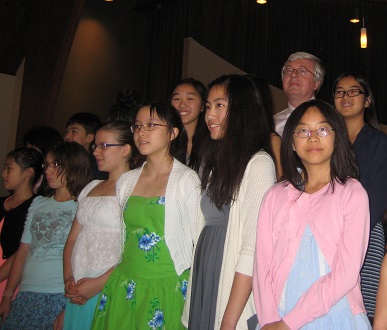 Sergei Pavlov piano school Debut Piano Studio welcomes students from the eastern part of the Greater Toronto Area. Our students achieve top ratings in RCM piano examinations in Toronto and win top prizes and scholarships in music festivals and competitions. Some of the piano studio's alumni went to further accomplishments: scholarships from the Glenn Gould School of Music, the Ben Steinberg Musical Legacy Award and appearances with symphony orchestras in the Greater Toronto Area.

Breaking News: Our student Johann Derecho just won the ORMTA Young Artist Competition at the provincial level on July 25, 2015. The same competition honoured him with the Esther Su Memorial Award for the most promising talent out of all competitors in different categories. Johann's prizes come with a monetary award and a concert tour in the province of Ontario. We are thrilled and looking forward to seeing him perform in concerts.

At the North York Music Festival Johann won the Founder's Award Class and Scholarship which entitled him to attend the Peter de Grote Festival and Summer Academy in Amsterdam, The Netherlands, in July 2015.

Emily and Julia won first prizes at the North York Music Festival. At the ORMTA Spring Auditions of the Scarborough Branch Emily won the First Prize in the Intermediate level and Maria was promoted to participate in the GTA Zone Instrumental Competition.

The Scholarship and Awards Auditions of the North York / York Region Branch of ORMTA concluded with scholarships and prizes for Emily, Julia, Justin, Chris and Johann

At the CCC Toronto Piano Competition, Chris won the second place in the ARCT level category with Partita by Bach.

Warm congratulations to all of Sergei Pavlov's students who participated in music festivals and auditions in the first part of 2015!

Featured below is a performance of the first movement of Griegs Piano Concerto in A Minor delivered by Johann Derecho, winner of the Second Prize and a scholarship in the Canadian Music Competition in June 2013. He plays here with the Symphony on the Bay at the 'Schumann and the Young Musicians' concert on November 3, 2013, at the Burlington Performing Arts Centre. Johann was the winner of Symphony on the Bays 2013 Young Artists' Competition , in the Junior category.

To view the videos below, click on the video camera - Watch video...

You can also visit the Youtube channel of Debut Piano Studio.